A client worth remembering…

For the past forty years I have had the privilege of participating in putting together some great advertising. It was possible because I was working  with some amazing talents.  But no matter how good the creative or the media buy, you can’t produce great advertising without great clients.  Stupid clients will break the hearts of creatives and are the reason account people are not allowed to carry guns.

I’m not sure what made me think of it now but one great client I had was Arlene Bunis, the then-advertising manager at M&T Bank in Buffalo.  The agency was Healy Schutte & Comstock.  She was clearly an excellent advertising manager, but I remember her mostly for her approach in treating vendors.  The bank’s marketing department actually had a Christmas party for its vendors including the agency, printers, media reps and, I think, even the FedEx guy.  It was a big affair.

Given the size of the bank’s account, HS&C had a good size complement of some of the best people in town.  I recall one writer in particular who was key to the account—a great writer, but a pain in the ass to work with.  He was always miserable, and his attitude crept on to the client side of the account. A bit unusual for such a young person in his 30s. There was a palpable tension between our client and the writer.

One day, while sitting with sunshine at his desk to go over copy he had written for a piece of bank collateral, I received a phone page.  Arlene was calling about the very copy we were discussing.  How opportune.  She had a couple of comments about the copy,  and as she spoke, I pulled out a pencil and began making notes on the copy.  The writer responded loud enough for Arlene to hear: “What’s that bitch doing to my copy?”  I asked my client if I could call her back.  Gracefully, she agreed.  My response to the writer was ballistic!

But here’s the point of my recollection.  One day Arlene arrived unannounced at the agency, walked straight past the receptionist and on up to the creatives.  One of the traffic people quickly came into my office and whispered that Arlene had just marched up to the creative department. “Oh crap–now what?”   I left my desk and followed her up.  Turns out that there was a Jewish holiday taking place, might have been Rosh Hashanah–and coincidently both the writer and my client were Jewish.  Arlene was from Buffalo with a large family in the area.  Sunshine was from out of town with no local family.  Arlene walked up to the writer’s desk and told him that he needed to be at her house the following evening for dinner.  “A good Jewish boy should not be eating alone during a holy time.”

A few days later, the creative director mentioned that our writer seemed to have mellowed a bit and was a little less intense.  Personally, I didn’t notice any difference, but who can tell about creatives.

And for all the things you might love or hate about this business, you’ve got to appreciate the drama.

Epilogue: Last summer, M&T Bank celebrated the 50th anniversary of its Plaza Events series.  It’s the one where the bank provides free lunch-time entertainment on the plaza in front of their corporate HQ.  Just about thirty years ago, while at Healy Schutte & Comstock, I was asked to pull together a full page, 4/C ad for the 19th anniversary of the Plaza Event series.  Tom Curtin was the writer and Gordy Stoll was the illustrator.  Tom & Gordy were two of the best creatives in the city and a hoot to work with.

The illustration that Gordy did for the ad featuring the event and the bank’s HQ building was amazing—I mean really amazing.  But the cherry on the parfait for the whole effort was Tom’s headline, LET’S DO LUNCH.  With pride and confidence, I went with my portfolio to the bank to present the ad.  Arlene loved the illustration but gave a flat NO to the headline.  She was adamant.  Because the bank didn’t actually offer food at the event, she did not want to imply that lunch might be available. Disappointed, I took the ad back to the shop for new a new headline.  While I was disappointed, the entire creative department was despondent.  It was open rebellion.  Even with the amazing art, without the headline, the ad was only good, not great.  The more I thought about it, the creatives were right.  I was going to give it one more shot, but this time with a plan.

Arlene was visiting the agency for our weekly status update on the forty other open projects we were working on. Following the meeting, I asked her to come upstairs to discuss some new ideas with the creative director and to get a final sign off on her Plaza Event ad.

When we walked into the creative department, the entire creative staff had assembled around her Plaza Event ad–still with Tom’s original headline.  Arlene looked at the ad and threw a hard-questioning stare at me.  With that, Gordy, Tom, and the creative director launched into a last-minute rationale for keeping LET’S DO LUNCH.  The dozen other creatives unanimously nodded approval and gave a thumbs-up.   Arlene relented on one condition. Gordy needed to include a hot-dog cart in the lower right corner.  The ad would run with the original headline.

It wasn’t so much that we had convinced her that keeping the line was the right thing to do.  Rather she gave the agency latitude to push back if they thought they were right.  That’s what great clients do.  Leo Burnett said, “I have learned that any fool can write a bad ad, but that it takes a real genius to keep his hands off a good one.” 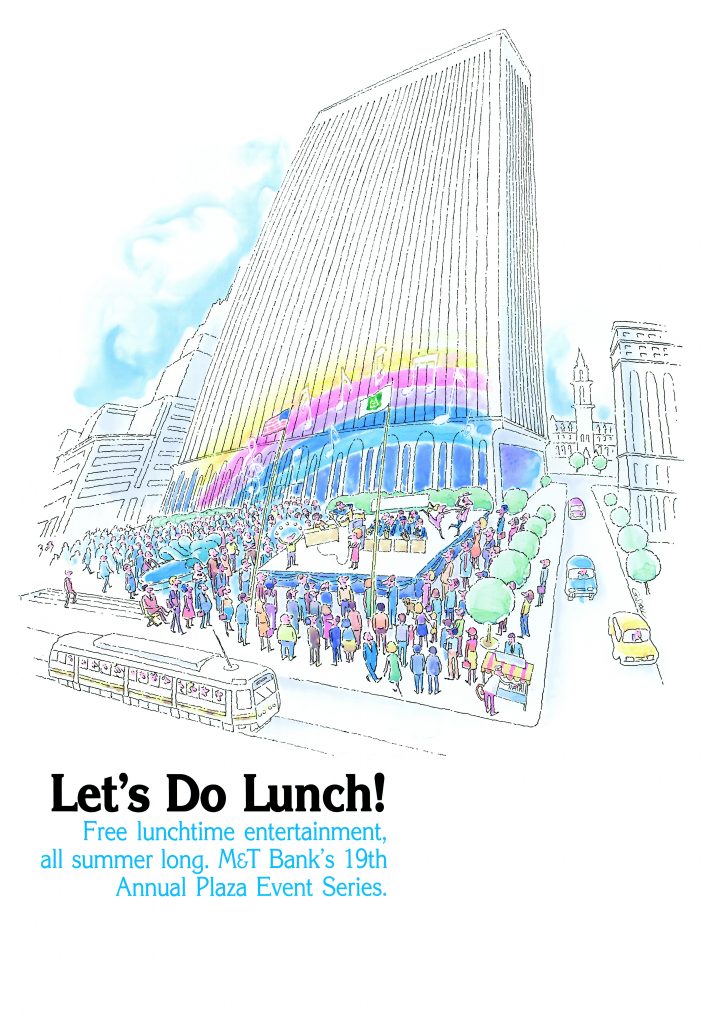 Got a gold at the following year’s Ad Club awards show.