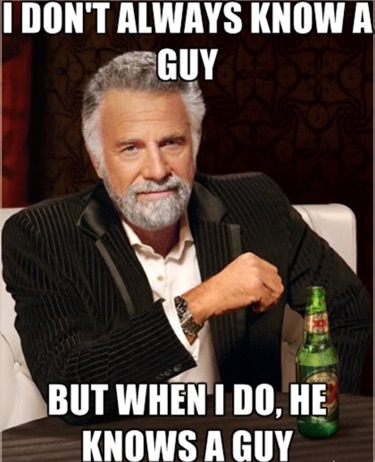 If you’re only focused on reaching marketing-decision makers and not the whole community, a lot of new business will just pass you by in the night.

What do you have to know to be an account manager?  I always told students: “I can’t tell you the right way to do this.  I can only tell you how I do it…and I’ve earned a reasonably good living at it.” I learned it along the way by working for some really great bosses and reading Solomon, Trout & Ries, Dikinson, Ogilvy, Wunderman, and a bunch of other serious ad people. I didn’t necessarily want to get smart about this stuff–I just didn’t want to sound stupid.  But for all the books I’ve bought and read on advertising and account management, there’s one aspect to the job that I’ve never seen adequately covered: “knowing a guy.”

When a senior account manager is at the client’s facility, that senior agency person is representing the agency.  He or she should be able to speak for and make commitments on behalf of the agency.  When the senior account manager is back home at the agency, he or she is representing the client and will make penultimate comments and decisions on behalf of the client.  The account manager is the conduit between the shop and the client.  That’s the easy part.  But for an agency to thrive, there has to be a conduit between the shop and the community it resides in.  It’s more than just networking to the relevant B2B categories. You need to become A Thought Leader.  Thought leadership is all about knowing and understanding trends that are affecting clients and marketing communications in general.  It’s easy. You just have to have been doing it for a long time, be really good at it, and be a great communicator…verbally and in writing.  And also have a broad reputation in the relevant categories.  Piece-a-cake.

In addition to being able to engage in protracted discussions about media, design, PR, direct mail, research and branding, a senior account manager (a thought leader) needs to be able to knowledgeably talk at lunch counters and clubs about what’s going on around town–around WNY.  You need to read more than one news source every day.  You need to be interesting and be seen and noticed by relevant people around the city.  It’s not enough to know whom to call for whatever challenge happens to be up.  It’s important to be known yourself by business and community influencers who can refer their associates to you.  We conduct business as B2B practitioners, but we need to think past B2B and act business-to-consumer.

Account people need to wade into the community, join the clubs, do pro bono for worthy community affairs, have coffee at coffee shops and not just at their desk.  There go the weekends, but that’s the business we’re in.  Is mar­-com account service just a hobby? Or are you intending to earn a living at it?

Right now, over at Spot Coffee some financial services VP is asking his friend, who sits on the library board, if he knows anybody whom he can talk to about whatever branding is. You want to be the guy who gets the call.
I know a guy who knows a guy who might know a guy.

Epilogue:
I’m a little blurry on the era, but I’m clear on the who and what.  Sometime back in the mid-eighties, I was working at Eric Mower’s Buffalo office.  The account at the time was Continental-General Tire out of Akron. Continental-General had just inked a deal to become the official tire of the NFL, whatever that meant.  To celebrate the new arrangement, the company shut down the plant for an afternoon for an all-employee picnic, including families.  To tie the event together, I had to arrange to have an NFL celebrity or two show up for autographs.  It was suggested that I contact a particular sports agent in Los Angles to arrange for a couple of big name NFL players to attend.  When I heard the price, I had to take a deep breath followed by a gulp.  I don’t recall the exact amount, but it was in the many thousands of dollars. It was ridiculous.

I didn’t know anybody over at the Buffalo Bills but had heard of a guy named Denny Lynch, who was supposed to be a nice guy, and accessible. I called him and explained my challenge, and he referred me to Norm Gotlieb at the Cleveland Browns–forty miles up the road from my client. Mr. Gotlieb, Norm, said that there were two hall-of-famers that spent most of their retired days at the Brown’s offices and training facility: Marion Motley & Lou (the toe) Groza.  Both were well into their later years and spent their days reliving long-past memories.  Norm said, give them each a hundred bucks for an hour of autographs and you would make their day.  Done deal.  We arranged to have them picked up in a stretch limo, gave them each a hundred, and arranged for dinner with their wives at the priciest steak house in Cleveland–a night on the town.

When they arrived in Akron, their advanced ages apparent, Lou-The-Toe had some difficulty walking.  He needed to be helped somewhat by Marion.  They were two real characters who argued constantly like an old married couple who were best friends and had an endless supply of amazing stories.  They were a comedy team that had hundreds of people laughing. 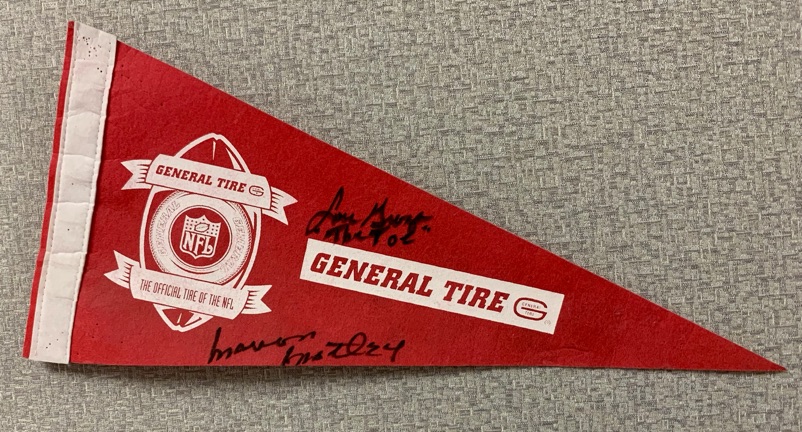 The autographing went on for three hours with them signing everything anybody put in front of them. And everyone loved the competing memories of their glory days.  It was a great event. Thanks Denny.

I heard of a guy who knows a guy.